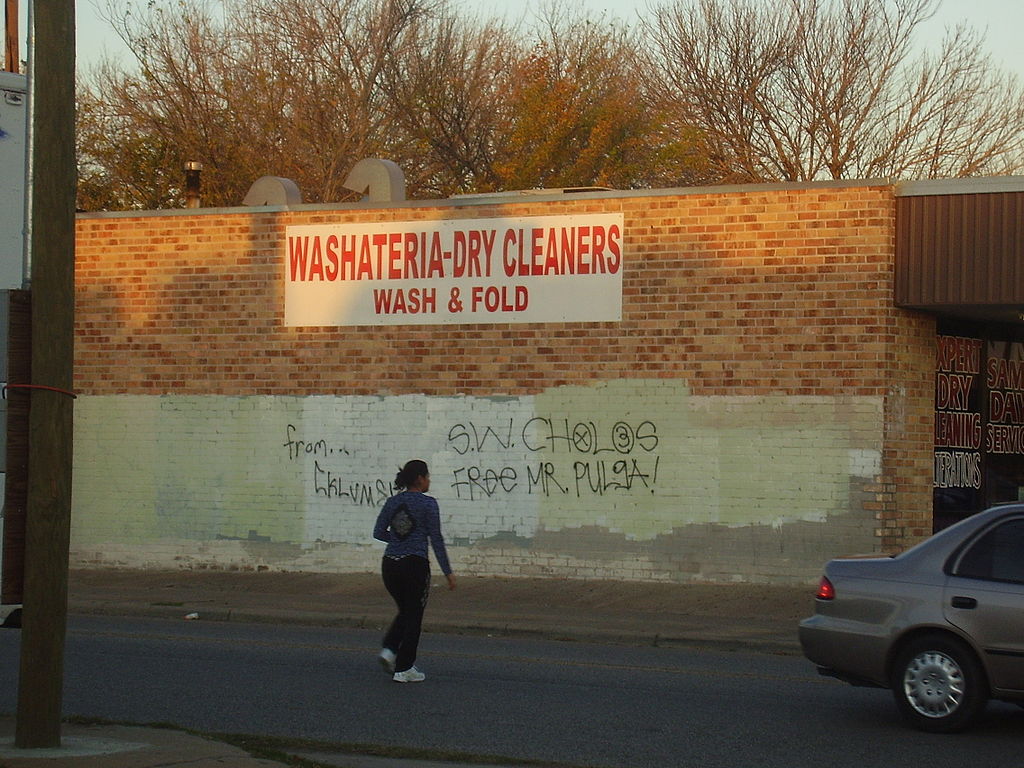 The first grocery store I saw when I moved to the United States was a meager looking spectacle called Sellers Bros. in a rundown strip-mall area of southwest Houston, TX.  The store’s shelves were as overcrowded with bargain, generic-name products, as it’s aisles were with patrons shuffling from one end of the building to the next, holding tightly to their Lone Star Cards needed to feed their families for the month.  The building’s somber looking outer-structure held a passing resemblance to the apartment complexes that surrounded it only a few paces away—one of which my family was living in at the time, serving as our first exposure to the realities of inner-city American life we had immigrated to, and were gradually assimilate with.

The majority of the neighborhood was composed of immigrant families.  Though unlike my family, which originated east of the Atlantic Ocean, it was impossible not to notice that most of my neighbors hailed south of the Rio Grande.  As a result, while I had come to this country with the advantage of being able to speak English reasonably well—well enough to understand, and be understood by the general Anglophone population anyway—this advantage proved of little value on the very street I called home for these years of my adolescence.  It was an early education to the fact many living in urban America are readily familiar with.  Namely, that within the reality of American life, reside smaller sects of conflicting realities, many of which can neither communicate nor understand one another, and are set up so that they will rarely meet.  Gulfton Street in Houston, Texas, occupies one such reality.

Tucked away between two major highways in southwest Houston, spanning a stretch of 3 to 4 miles of cracked concrete landscape, sits the street of Gulfton.  The epicenter of the Gulfton Ghetto, as it’s occasionally called by the local media and by other Houstonians (though never by the neighborhood’s own inhabitants).  To those who take a wrong turn off Bellaire and find themselves driving down Gulfton Street by accident, the insulting nickname will seem most warranted.

The immediate sights one is met with are panel after panel of gang graffiti, row upon row of low-rent apartment complexes, and concrete sidewalks that have been in desperate need of repair for a good few decades now.  Surprisingly, there is a park/recreational center meant to give some relief to the area’s ongoing problem with juvenile delinquency, though anyone who has ever stepped onto the park itself will be quickly robbed of any hopefulness at the prospect of this endeavor.  In short, like many neighborhoods in urban America, Gulfton is a place that has been largely abandoned to the ravages of metropolitan entropy.

Under-funded and halfway flushed out improvement projects that have failed to live up to expectations are pointed to by the rest of the city as reasons not to bother with any future attempts at repairing the crumbling infrastructure.  Leaving the residents who have given up on the idea of moving away to either wall themselves off from the unsavory conditions that surround them within their private residences (however meager they may be), or embrace it by becoming a part of its destructive nature.

The first instinct any well-meaning person will have when confronted with a reality like Gulfton is, “Can anything be done to fix this?”  It’s an honest question, but it betrays a lot about the person asking it.  The idea that there is any one thing that can resolve problems that are decades in the making is a part of the problem to begin with.  These sort of problem are such that they have no one facet of origin, but are a delicate, interwoven mess of social, economic, and political barriers erected and maintained through complex systems with interests that themselves compete against and prop up each other in a multitude of ways.  The problems of Gulfton, like the problems of similar neighborhoods and populations throughout this country, have no single cause; hence they can have no single solution to curb the path they are currently on.

“Why don’t the people living there work to fix things?  It’s their neighborhood, after all.  Don’t they care?”

Unfortunately, the reality of all urban areas is that they are landlocked and dependent on the larger metropolitan that surrounds them.  They don’t get to make decisions in a vacuum, and resources are finite and sparse in terms of what will be readily allocated to benefit them.  The further issue is that once a neighborhood has fallen far enough to be regarded as “hopeless” by officials and administrators who could possibly make a difference, the very hopelessness of said neighborhood is used as the reason against committing long-term funds to improve its conditions, on the basis that it would be unfair to use tax dollars from well-behaved citizens in more savory parts of the city to fund the activities of no-good thugs and gangsters in these low-income, high crime areas.  Local agencies will say they are not equipped to handle the expenses needed to undertake the sort of social projects necessary to overhaul the issues plaguing these sorts of areas, while Federal agencies see these issues as strictly a local concern.

In the absence of a robust social safety net provided by the city or state authorities to ensure the most basic of securities and public amenities, opportunistic forces will band together to construct their own safety nets, which for many young people will take on the form of turning to gangs that prey on social instabilities as a means to offer their quasi-organized crime structure as an alternative to festering in a decrepit social system.  The reason youths are most susceptible to this, is that they are the most in need of some kind of functioning social order to orientate their lives (and relieve their boredom), and even the violent and dangerous structure of a gang life is to many preferable to the instability of no visible structure at all.

Some people have a natural aversion to hearing that any issues constitute a systemic problem, requiring a systemic approach to resolve.  They conjure up images of how the very notion of entertaining such a thought is little more than an attempt to skirt away responsibility from the individuals and let them avoid the consequences of their actions and/or apathy, leaving them no incentive to make things better on their own accord.  I can understand the sentiment behind this aversion, though I find it largely misinformed.

In a place like Gulfton, how exactly do you expect the individuals living there to step up to fix the various problems that plague their environment?  Should they pool their meager earnings together to pay for the ongoing structural damage to their concrete sidewalks and street signs, despite the fact that we’re talking about city property and as a results is an issues needing to be addressed by the local government?  How about the need to improve the resources available to the local schools so that there can be robust after-school programs and activities available for young people to occupy their time with to discourage the need for delinquency and gang activity?  Should the low-income earning parents of these youths fund these programs directly, thereby taking money away from them that’s needed to pay rent, utilities, food, clothing, etc.?  Would that be an example of individuals stepping up to take personal responsibility to improve the conditions around them, or a neglect of one’s obligations to provided basic necessities for one’s own family first?  If donating money is not the answer, surely we can get everyone to at least volunteer their time to improve their community, no?  It’s not as if the sort of people who have to live in these sorts of neighborhoods, are undoubtedly also stuck working jobs with little to no flexible hours or time off, after all.

Perhaps the answer is that all these folks ought to work harder to increase their earnings, so they aren’t hostage to their economic conditions.  Yet, if they actually managed to do just that, what incentive would they have to spend their extra earnings on repairing a place like Gulfton, as opposed to–oh, I don’t know–simply moving away to a better part of town that already offers all the basics of having dignified living conditions?

Unless you are Bruce Wayne, sitting on an endless supply of inherited wealth, resources, and leisure time, individuals donating money and/or donating time, will never be a solution to the problems that affect neighborhoods like Gulfton.  These are problems that took a long time to manifest, and they require long-term investment and planning to be resolved. It requires layers upon layers of overarching organizational resources, to properly oversee and track improvements, that no single individual or clustered group is capable of providing.  Private businesses, local or otherwise, also offer little help in the matter, since their is no business incentive in investing in a place simply to improve the lives and environment of its residents, since these residents will not be able to return the gesture on account that, at the end of the day, they’ll still be too poor to ever be able to turn a profit for these businesses.

And it takes an astounding level of naivete to not be able to realize this.  The same sort of naivete that leads certain people to make inane points like, “If you like public programs, and think taxes should be higher to pay for them, why don’t you just volunteer more of your money on an individual basis, instead of demanding everyone else do it through the tax code?”  Because individual actions and donations will not solve systemic problems like the ones affecting neighborhoods like Gulfton, that’s why.  Because many of the problems plaguing inner-city life are far too complex and interconnected to a multitude of surrounding factors to be seriously brushed off with red herrings concerning individual responsibilities.

Areas like Gulfton are the way they are because they have become culturally and economically alienated from the rest of their metropolitan centers, and the rest of the country at large, and little is being done to incorporate them into the greater society that surrounds them.  The full reasons for this alienation are legion, and the solutions that will be necessary will by definition be just as extensive, which is a reality that must be acknowledged by those who purport to take the issues of working, urban, and immigrant communities seriously.

If, on the other hand, you simply don’t care about places like Gulfton, then just say you don’t care, and stand by the convictions of your apathy.  And stop pretending that there is a greater moral or ideological basis to what is essentially pure disinterest for the plight of people you can’t be bothered to give a shit about.  It will make for a much more honest conversation.