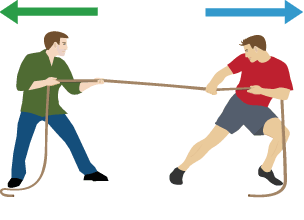 So you’ve decided to write a story.  Before you begin, you put together a pretty coherent outline.  You have your protagonists and antagonists all clearly panned out.  You might not know exactly how long it will be, or all the minor details that will pull the whole plot together, but if there’s one thing you do know it’s exactly how the major parts of this story will progress from beginning, to climax, to finish.  There’s just one itsy-bitsy problem–your characters aren’t behaving like they should.

It’s hard to pinpoint what it is, really.  The dialogue is crisp and clean; without too many overly excessive and cumbersome adjectives repetitively cluttering up the prose.  All the different personalities are well laid out, and totally not cliche or one-dimensional.  There’s a deep subtext noticeable throughout the work, though not of the rambling variant [yeah, suck on that, David Foster Wallace].  But there’s something that just is not working, and it’s driving you crazy trying to figure out why your narrative is not behaving as it should–as you have so clearly planned it out from beginning, to middle, to end.

What the hell is going on?!

Well, you’re in luck, because I may just have the solution to your problem.  The problem probably isn’t that the story you’ve set out to write is unmanageable, or that the characters you’re eager to create aren’t as capable of being the greatest heroes and villains in fiction as you’ve imagined them to be.  More than likely, the problem is you.  By which I mean, the problem is that rather than letting your story unfold, and your characters respond and adapt to their surroundings, you have allowed yourself to get stuck in one of the easiest pitfalls for an author to find her or himself in: you have forced the narrative.

Forcing the narrative can happen in many different ways, but the most common occurs when authors stubbornly refuse to follow the natural progression of the story they have set out to create, for no other reason than that doing so may deviate from the original blueprint they have arbitrarily committed themselves to in their minds.  And, of course, stagnant character progression is often the first victim to suffer as a result of this stubbornness.

Say, for example, that you’re writing a story that has two characters that you know you intent to have fall in love halfway through the plot.  You introduce them separately to the reader, so each can have distinct personalities that your potential audience will relate to.  They spent all these pages developing identities that are unique and self-sustaining (as they very well should be), but the moment you finally have them interact with each other–the moment the entirety of your whole plot hitherto was supposed to be leading up to–and…there’s nothing.

Where you thought the dialogue would flow smoothly between these two people you crafted to be perfect for one another, all their exchanges instead sound too contrived to be authentic.  You can force them to say all the things you think are necessary to convey the message that they are love-bound soulmates, but every time you do just that everything that comes out of their mouths starts to read like a rejected script for a corny made-for-TV movie of the week.

So what gives?  Are you such a lousy writer you can’t even get a genuine romance plot right?  Maybe…or maybe you’re working to hard to wedge a square peg trope into a heart-shaped prose.  By which I mean, maybe the characters that seemed perfect for each other before you put pen to paper…err…I mean, fingertip to keyboard?… whatever, the point I’m making is that a plot idea can seem perfect before you set out to write it, but once you get going it can become downright impossible to stay true to said idea without sacrificing the integrity of the narrative you have created up to that point.

As already mentioned, this dilemma can show itself in the most basic of details.  Including the very issue of whose story it’s going to be.  You might have a main character in mind from the start, but the more time you spend with him the more you start feeling like writing intriguing dialogue for him is a strenuous task taking up way too much of your creative concentration than it should.  Perhaps you even find yourself preferring to spend time with secondary characters that have taken on more interesting lives compared to your once-great-now-bland protagonist.

“Well, what’s to be done in this case?”  Good question, hypothetical reader!  When you are in the thick of this frustrating bit of a writer’s conundrum, it’s easy to miss the simplest of solutions staring back right in your sleep-deprived, bloodshot eyes.  That is to say:  Screw your preliminary outline.  Tear up your rough draft notes (it’s called a rough draft for a reason, after all).  Go with what your instincts tell you as a reader first, and ignore the self-righteous indignation of your inner-writer unwilling to deviate from an unworkable premise.

Are two characters not hitting it off as well as you thought they would?  Fine, try having them hate each other instead.  Or even try pairing them up with side characters that showed more prospect in the plot, and see where that goes.  Is your main character too wooden to lead the story the way you hoped?  Then why not sideline him, and shift the perspective onto a different character whose personality and dialogue carries your narrative forward with so much more ease than you ever thought possible?

All these options are readily available to you, because, no matter what, it is your world–it can only exist as you wish it to.  But you need to trust your instincts, not just as a writer, but also as a reader on what makes for compelling storytelling.  And you are allowed to change your mind about the details of the happenings in your fictional world, if these changes help bring about the greater narrative you set out to breathe life into.  Treat the initial bits of ideas that inspired you to start on your journey as just that–a cursory launching point to something better.  Nothing you write down–be it at the beginning, the middle, or the end–is sacred scripture.  It is not absolute, or inadaptable to subsequent burst of creativity that may strike you once you have already begun to feverishly churn out the bulk of your prose.

It’s important to be aware that if something doesn’t feel right about your story to you as you are barely writing it, it will definitely not seem right to your readers as they are reading it.  Even if they might not know how to articulate what’s so off-putting about it when they notice a belabored prose, the audience can definitely sense when something isn’t working as well as it could be.  And forcing a narrative, in an otherwise great story, is a perfect way to ensure that it won’t be working for anyone; neither you, nor your characters–but, above all else, not the reading public.