The other day I got a chance to revisit John Wayne’s epic war film The Alamo.  As one can assume from the title, the film depicts the events surrounding the 1836 Battle of the Alamo, whose legacy served to inspire popular support for the ongoing independence movement led by the white American colonists living in what was then Mexican territory.  It would be an understatement to say that the film does not strive for historical accuracy.  Rather it focuses more on the mythical nostalgia that has developed among the white Texan population since the battle (and persists to this day); fervently espousing a message of freedom and republicanism over tyrannical oppression as a likely allegory to the Cold War struggle taking place during the film’s release in 1960.

In Gunfighter Nation, historian Richard Slotkin defines myths as “stories drawn from a society’s history that have acquired through persistent usage the power of symbolizing that society’s ideology and of dramatizing its moral consciousness” (p. 5).  Within the history of Western expansionism, the Alamo stands as a hallmark of American fortitude, where the legacy of the event has all but displaced any concern for veracity by its admirers.  This is the sentiment on which John Wayne builds his tale of The Alamo, occurring chiefly within the framework of the Western genre that his own quasi-mythical persona helped create in American culture.  The message that Wayne is adamant to reverberate throughout the film is the idea of nostalgia.  As evident by how the plot begins and mounts its climax with Sam Houston prophetically commenting on the need for future generations to remember and uphold what is being done in 1836, to keep it in their hearts as the life of Texas.

Although the film’s setting is in Texas, depicting a Texan struggle for freedom from oppression, John Wayne’s constant reminiscing about republicanism—a clear attempt to mimic his perceived Jeffersonian ideal of democracy—transforms the entire narrative into a classic tale of American virtue relatable to all red-blooded patriots.  It doesn’t take much to realize that Wayne’s Davy Crockett is not meant to be an accurate representation of his historical namesake, but an emblematic stand-in for Wayne’s personal principles (as seen by the dialogues his Crockett gives, where the lines often closely match Wayne’s 1977 patriotic oration America: Why I Love Her).

This is best seen in the first exchange between Colonel William Travis and Davy Crockett, where Crockett proclaims, “Republic, I like the sound of that word.  It means that people can live free, talk free, go or come, buy or sell, be drunk or sober, however they choose.  Some words give you a feeling.  Republic is one of those words that make me tight in the throat.”  Of course, the irony that Texas is being freed by slaveholding Americans is absent from Wayne’s proclamation.  Instead, he focuses on the myth that Americans (in particular white Southerners) heralded the true spirit of the Texan cause: freedom.  This is vital in establishing the message that we are viewing a battle between right and wrong, and since an independent Texas is presented as the land of opportunity, hope, and future, all who stand against it can only be on the side of despair and tyranny.  The essential myth Wayne accomplishes here is the substitution of frontier Texas into contemporary America’s struggle against the evils of the world. 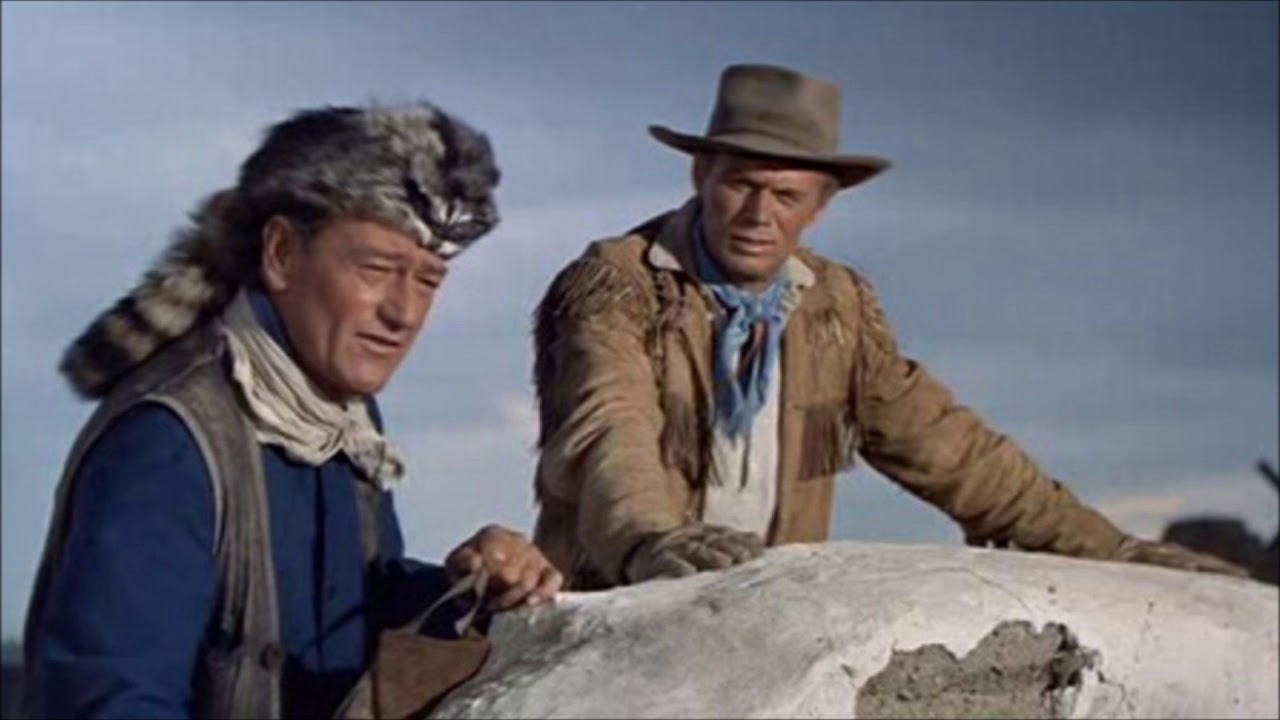 The film itself acknowledges its affirmation of myth over fact in a telling scene in which Crockett reads out a forged letter he had written under Santa Anna’s name, urging the American men to leave Texas at once.  The pompous tone of the letter causes Crockett’s men to see it as a clear attempt of intimidation, and as men they are obligated to respond harshly to such antics.  Crockett does immediately admit that he in fact wrote the letter, but justified it on the basis that its contents were in line with what Santa Anna might have written.  Nevertheless, the men are so agitated at the possibility of Santa Anna addressing them so self-righteously that they readily take up the Texan cause for freedom and independence as their own.  Never mind that the letter was a fake, created and existing solely in Crockett’s imagination.  Moreover, no man present bothers to question how Crockett, a native of Tennessee, whose knowledge of Santa Anna stems solely from hearsay, could possibly know what sort of message Santa Anna would give to these Americans.  And no one cares, because the reasoning behind established myth “is metaphorical and suggestive rather than logical and analytical” (Slotkin, p. 6).

The Alamo is a film that needs to be analyzed through the time it was made in order to fully grasp its underlying theme.  In 1960, the United States was engaged deep within the Cold War struggle against the Soviet Union, a conflict which to most Americans stood as the absolute battle between liberty and tyranny.  Of course, in 1960, America had little idea of how the conflict would eventually unfold in the next three decades, thus it became a dire priority to raise American consciousness against the forces of oppression on the other side of the world.  John Wayne, being a staunch anti-Communist, anti-Leftist patriot, creates a historical narrative that serves as a helpful analogy for the American people to grasp how the fight against tyrants is an American virtue that reaches deep into the country’s roots.

For Wayne, promoting such a message could also have been an attempt to atone for his failure to serve in World War II, an inconvenient truth for a man who built his career on portraying brave patriots who answered the call of duty for their country.  In reality, the fact still remains that John Wayne could only live up to his image in make-believe movies, never in real life, which perhaps fostered much of his simplistic dialogue promoting war against perceived tyranny.  The opening scene of The Alamo starts with a harsh condemnation of Santa Anna as a malicious dictator, determined to “crush all who oppose his tyrannical rule.”  Just as the Cold War narrative between the Unites States and Soviet Union was simple, so is the narrative between Santa Anna’s Mexico and the American-Texan forces in 1836–it is simply a fight between right and wrong.

Little background information is given about any of the major characters involved in the fight for Texan independence.  Nor is there much said about why a large population of white Americans are living in Mexico to begin with, or how they are specifically being oppressed by their adopted country.  Crockett and his men are the only white settlers shown actually immigrating to Texas, and the only background on Crockett is that he was in Congress before becoming a raccoon-hat wearing adventurer on the frontier.  Although his time in Congress is portrayed more as a mundane series in his life, rather than having been a worthwhile endeavor on his part (Crockett’s negativity towards policymakers is likely a reflection of Wayne’s own frustration with contemporary politicians who are not doing enough to combat the menace of the Soviet Union).

It also does not take much to see that Santa Anna is meant to be a representation of the archetypal Soviet dictator—though perhaps not so much on par with a Stalinist megalomaniac, as a boorish Khrushchev autocrat.  As a result, John Wayne is attempting to blend the urgent threat of the present with a treacherous (yet, ultimately defeated) enemy of the past; hence, Crockett’s nostalgic musing about the state of his mind right before a noble, though hopeless, battle as “Not thinking; just remembering.” Yes, a battle may be lost, but the final outcome has always been victorious for those who choose the right path; the war will still be won in the end.

John Wayne’s The Alamo heavily orientates around the notion of cultural nostalgia, and how this looking towards the past serves to foster a positive consciousness towards the future.  Wayne does not care to provide a reliable history lesson to his viewers, however.  Instead he provides a needed myth that retells a known story the way he believes it ought to have happened, and ought to be seen.  In that sense, he is foreshadowing the lines that will be uttered in one of his better cinematic works, The Man Who Shot Liberty Valance: “This is the West, sir.  When the Legend becomes fact, print the legend.”  The Alamo is the legend, not just to Texas but all freedom loving Republics (i.e. America as a whole), and for John Wayne, if it is to be remembered at all, it better be done the right way–his way.