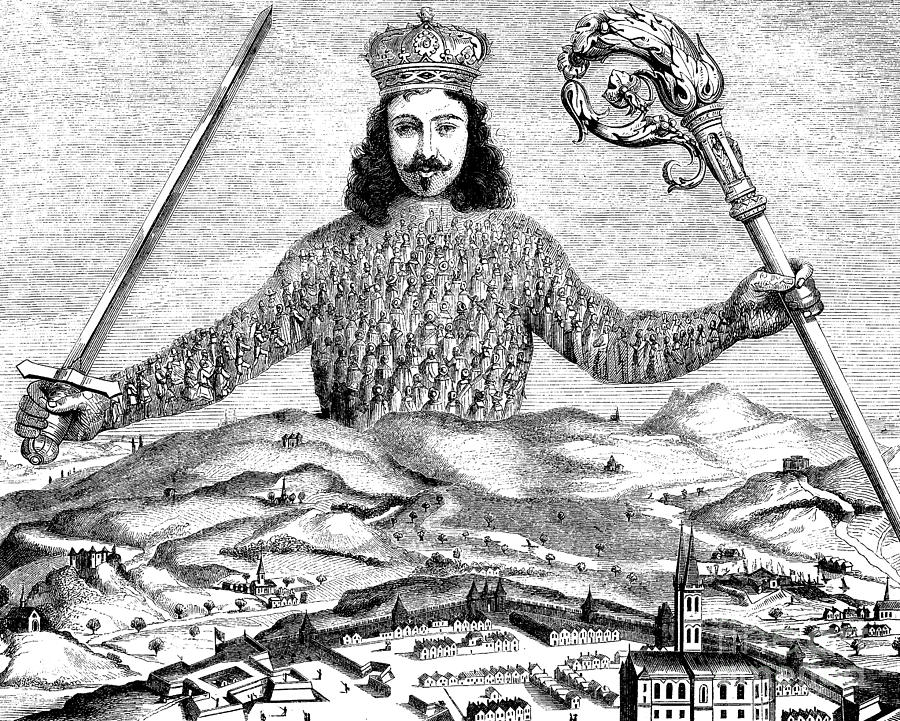 Thomas Hobbes’ Leviathan is arguably one the most influential works of political philosophy since Plato’s Republic.  In the book, Hobbes sets out to demonstrate how, and why, man has come to create social and political structures, in concurrence with other men, and thereby buildup the pillars of civilization and modes of governance.

Hobbes’ central premise is that, absent of social structures, humans occupy a realm called the state of nature.  Such a state is a lawless, cruel, savage plain of existence, in which the primary instinct of all living creatures (including man) is solely to survive.  However, man—being a rational animal—realizes that the greatest method to satisfy the survival instinct is to try to avoid the brutal pangs of the state of nature altogether, and the only natural means by which he can do so is by seeking security and protection in greater numbers; since the strength of a group will always be immensely more powerful than the strength of the individual.  Furthermore, to ensure stability and efficiency of such a system, the members of the forged society must agree to a certain set of covenants–the social contract that is to be followed by all individuals within the group–that are to be followed by all persons who wish to remain within the protection of the greater community, or risk being exiled back into the savagery of the state of nature.

A reasonable challenge to Hobbes’ program is to inquire about the exact means by which a society (or, commonwealth, as he calls it) is to enforce the covenants of the community; namely, how justice is to be established and ensured.  Hobbes, himself, acknowledges the importance, “that man perform their covenants made:  without which covenants are in vain, and but empty words.”[1]  For Hobbes, the issue of justice is rather simple, if there exists no covenant between individuals, then, “no right has been transferred, and every man has right to every thing [i.e. the state of nature]; and consequently no action can be unjust.”[2]  On the other hand, “when a covenant is made, then to break it is unjust:  and the definition of INJUSTICE, is no other than the not performance of covenant.”[3]  The agreed upon social contract is the foundation upon which Hobbes rests his political theory.  In absents of such covenants, lawlessness reigns supreme, and justice is an incoherent premise.  But, once covenants are made among individuals, and a commonwealth is formed, the perimeters of what is to be just, and what is to be unjust, are established, and a failure to follow the decree of the covenant, renders one’s actions unjust by definition.  However, that also leaves open the question of how, exactly, the consequences of the individual’s actions are to be determined by the commonwealth.  Hobbes’s answer is unapologetically authoritarian:

Therefore before the names of just, and unjust can have place, there must be some coercive power, to compel men equally to the performance of their covenants, by the terror of some punishment, greater than the benefit they expect by the breach of their consent.[4]

A proprietor is needed to maintain the covenant, without which justice cannot exist in a commonwealth.  As far as Hobbes is concerned, all these components are dependent entities, and inseparable of the existence of a functioning commonwealth (i.e. a society).  For, it is by agreement of their covenants (the entering into the social contract) that the individuals grant the establishment of the commonwealth, and from there, also consents to the power of a proprietor, to employ social cohesion on the members of the community and give legitimacy to the rules of the covenant.  “So that the nature of justice, consisteth in keeping of valid covenants:  but the validity of covenants begins not but with the constitution of a civil power, sufficient to compel men to keep them:  and then it is also that propriety begins.”[5]  Thus, the establishment of a powerful sovereign, of a centralized governing body, is the natural extension of social covenants, and communal living in general.

Although Hobbes’ reasoning is not difficult to follow, one more issue still remains: what about those who reject the seriousness of the covenants?  Is it not imaginable that certain individuals, acting in their self-interest, will enter and break covenants as the mood strikes them; undermining the basis of justice?  And if enough individuals in the commonwealth follow this example, will not the entire social structure become flimsy, and the administration of justice become unmanageable for the proprietor (i.e. the sovereign) to perform?  Hobbes has a harsh reply to this mode of questioning, “The fool hath said in his heart, there is no such thing as justice.”[6]  For those who do not take the covenants of the commonwealth seriously, Hobbes does not take seriously.  He argues that such individuals—the fools—have no difficulty seeing the benefit of covenants when it serves their immediate interest, but only refuse to oblige by them when it seems that the rules will refuse them a particular instance of gratification.  Yet, it is by this very admission of the need for covenants to give legitimacy to issues of justice, “He [the fool] does not therein deny, that there be covenants; and that such breach of them may be called injustice, and the observation of the justice.”[7]

Seeing as how Hobbes maintains that absent covenants, men stand alone in the realm of nature, where just and unjust do not exist, the conclusion he derives for those who break covenants is that they forfeit any reference to justice itself.  Therefore, this individual, who steps out of the covenant has lost the protection of the commonwealth, which is still governed by the merits of the social contract they have agreed to uphold, “therefore he which declares he thinks it reason to deceive those that help him, can in reason expect no other means of safety, then what can be had from his own single power.”[8]  And, since no man can truly know the depth of the dangers that may lie ahead of his solitary existence, Hobbes would ask the fool, is it not more reasonable to follow the decrees of the covenant in favor of momentary self-interest, because the greater strength and security of the commonwealth in comparison to the individual is guaranteed to offer a higher rate of survivability for all its subjects?  Because, given the savagery of the state of nature, the fool, “if he be left, or cast out of society, he perisheth.”[9]

Having settled the issue of how to define justice, Hobbes turns to the question of morality.  Namely, even if the stipulations of the covenants a commonwealth is governed under are legitimately just, how does one determine whether they are moral?  Hobbes approaches the matter by first defining what is meant by moral, “moral philosophy is nothing else but the science of what is good, and evil, in the conversation, and society of mankind.  Good, and evil, are names that signify our appetites, and aversions.”[10]  In other words, morality does not exist independent of human desires and inclinations.  In this sense, Hobbes is rejecting the notion of an absolute morality as unfounded in human nature.  Whatever public consciousness might persuade man to think of his morals, the historic reality shows that convergences on moral issues are not self-evident across customs, or across times, “Nay, the same man, in divers times, differs from himself; and one time praiseth, that is, calleth good, what another time he dispraiseth, and calleth evil.”[11]  Hobbes argues that since one individual’s opinion on what is moral rests equally against another individual’s opinion of what is moral, the state of nature, being devoid of justice (as argued above), will never allow for a peace on the matter, hence war will be the natural consequence.  However, man does not want war, as it runs counter to his instinct for security and preservation; thus, man can agree that the opposite of war, peace (even if not absolute), is objectively good; as are the means of achieving peace.[12]  To Hobbes, performing covenants is the best means to escape the state of nature, the consequence of war, and establish a coherent concept of justice.  Therefore, the question of what is to be deemed moral, is inherently correlated with what is considered just: obliging to the covenants of one’s commonwealth is the greatest good that can be done for oneself, hence (granting Hobbes’ premises) it is morally sound.

3 thoughts on “Thomas Hobbes’ Leviathan: Justice, and the Social Contract”