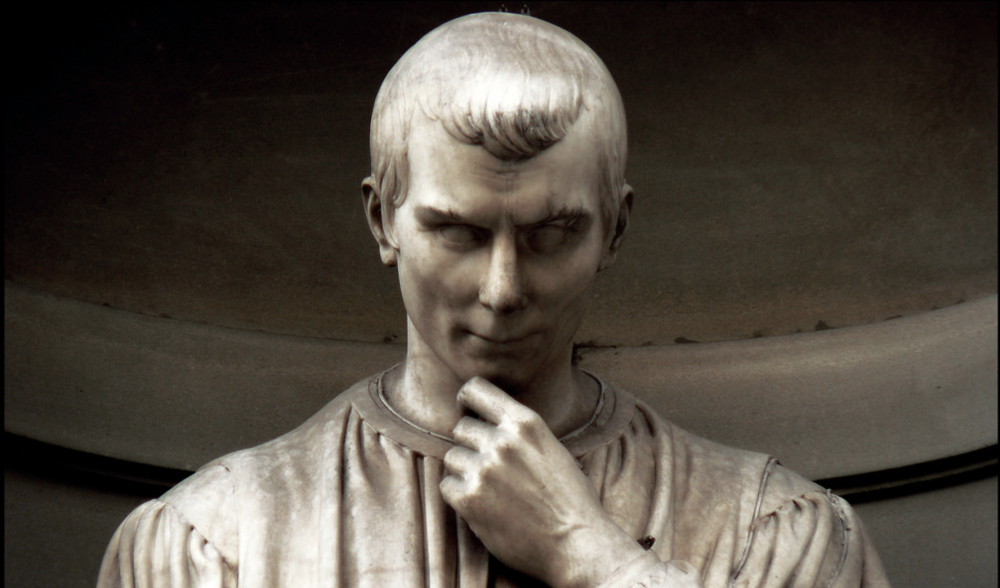 Niccolo Machiavelli is one the many writers in history fortunate enough to be extensively quoted by individuals who have little patience to actually read his large body of work.  Most (in)famous of the man’s oft cited prose is his 1513 political tract advising ruling figures on how to govern, simply titled The Prince.  In it he boldly states that when it comes to exercising one’s authority, the ruler needs to adhere to the basic principle that the ends always justify the means; with the ends always being a retention of power, and means being whatever will bring about that desired end.

Although at face value the work is a clear promotion of totalitarianism, there exist several peculiarities with the way Machiavelli formats his dictatorial learner’s manual.  For instance, despite it being address to the ruling classes of society, the book is actually written in the plain Italian of Machiavelli’s day, making its sensitive instructions to rulers available to the very commoners whose exploitation Machiavelli is encouraging.  Granted, literacy wasn’t too high among the lower classes, but for a manuscript aiming to teach governing sovereigns how to be more deceitful, one would think that Machiavelli would at least have bothered to make the message a bit more cryptic to the masses (possibly by writing it in Latin, which was already in disuse outside of aristocratic functions).  Even stranger is the fact that only six years later Machiavelli wrote Discourses on Levi, a political book that enthusiastically taunts the superiority of democratic republicanism over monarchical forms of governance; completely contradicting the authoritarian advise he offers in The Prince.  It’s possible that between 1513 and 1519, Machiavelli changed his preference from despotism to republicanism, but I think it is also very likely the allegations labeling The Prince a clever work of political satire should not be so quickly brushed aside, as it appears to be the most plausible answer to account for the discrepancies mentioned above.  If it is true that The Prince is nothing more but a satirical revelation of the aristocratic mindset, meant to convey to the lowly subjects the true nature of their rulers’ motivations, then Machiavelli deserves to be acknowledged as the greatest writer in all of history for composing a piece of satire that continues to fool people (scholars and laypersons alike) to this day.

Although Machiavelli’s politics might be evasive, his views on religion appear to be fairly consistent throughout his writing career.  In The Prince, Machiavelli refers to religion as a tool of the ruler, to be used as a method by which he can convince the masses of his benignity.  Machiavelli makes it clear that the sincerity of the ruler’s piety is of no importance:

Every one knows how praiseworthy it is in a Prince to keep faith, and to live uprightly and not craftily.  Nevertheless, we see from what has taken place in our own days that Princes who have set little store by their word, but have known how to overreach men by their cunning, have accomplished great things, and in the end got the better of those who trusted to honest dealings (Machiavelli, Niccolo.  The Prince.  Chapter XVIII, “How Princes Should Keep Faith,” (Pocket Books:  New York) 2004 reprint, p.83).

Machiavelli does not dispute the notion that faithfulness is a popular virtue, but he is arguing that while the Prince (i.e. the ruler) should take care to be seen as ideally faithful by his subjects, his actual actions need not be limited by any pious restraints.  In other words, if left to choose between preserving one’s crown and staying true to one’s religious principle, the competent ruler will always choose the former over the latter, “a prudent Prince neither can nor ought to keep his word when to keep it is hurtful to him and the causes which led him to pledge it are removed” (Machiavelli, The Prince, p. 84).  While Machiavelli’s words sound odious to our most basic sentiments concerning decorum and public honesty, it needs to be remembered that the writer is merely stating a fact that holds true for almost every person living, then and now.  Few of us are unwilling to amend even our most cherished convictions if opportunity demands it of us.  I will even go so far as to say that every single person, functioning in society, has at one point or another been faced with a situation in which s/he has gone against a core principle s/he claims to adhere to.  Of course, when confronted with our obvious hypocrisy we will find some way to rationalize it away as irrelevant, but what Machiavelli is advising is for the Prince to fully embrace his hypocrisy as a necessary part of his position.

On the topic of religion, Machiavelli considers it important for a ruler to exhibit the outwardly qualities that are popularly associated with the practice:

A Prince should therefore be very careful that nothing ever escapes his lips which is not replete with the five qualities above named, so that to see and hear him one would think him the embodiment of mercy, good, faith, integrity, and religion.  And there is no virtue which it is more necessary for him to seem to posses than the last (Machiavelli, The Prince, p.85).

Special attention should be given to Machiavelli’s word choice at the end of the above quote; note he says it is necessary for the Prince to merely seem religious, not to be personally sincere about it.   The reason being that people look for commonality when identifying with other individuals, and religiosity is a widespread system by which a variety of people pledge some base level of identification with one another.  Hence, an open proclamation of religiosity by the ruler is a key way for him (or any public figure for that matter) to retain support from the populace.  But it is inevitable that at some point the ruler will be faced with having to violate some religious decree, and according to Machiavelli this is perfectly acceptable, as long as he gives of the impression of being pious it is enough to convince the masses; actions are meaningless, “Everyone sees what you seem, but few know what you are, and these few dare not oppose themselves to the opinion of the many who have the majesty of the State to back them” (p. 85).  This is especially true for leaders who gain endorsement from the main religious institution, like the church, since such organizations often hold the final word on what is pious and what is not (religious belief itself is usually a secondary concern in these sort of church-state relations, if it is a concern at all).

It needs to be remembered that Machiavelli’s aim is not to teach how to deceive the common folk; rather what the writer is doing is measuring the worth of a Prince/ruler by the merits of his efficiency, “Wherefore if a Prince succeeds in establishing and maintaining his authority, the means will always be judged honourable and approved by everyone” (p. 86).  People don’t mind being lied to as long as it is a blissful experience.  Nor do they care about the piety of their leaders actions, as long as her/his words align with what they want to hear and their living standard remain comfortable.

I suspect–though I can’t be sure–that Machiavelli’s other aim was to openly document the method by which the lowly masses are kept content by their deceitful figure heads.  Perhaps his intention was to alarm the common man into action, but judging by the way political leaders to this day swoon their constituencies by a never-ending array of appeals to their personal piety (all while being documented adulterers, liars, frauds, cheaters, warmongers and war-propagators, and a whole lot of other “moral” transgressions), I doubt we really want anything else but to be deceived.  Or as Machiavelli himself put it, “”men are so simple, and governed so absolutely by their present needs, that he who wishes to deceive will never fail in finding willing dupes” (p.84).