Although it came to serve as a hallmark for the advent of the Gothic literary genre, Mary Shelley’s Frankenstein cannot be separated from its origins in the Romantic tradition.  The Romantic movement in literature (circa 1800-1840) was a reaction to the perceived mechanical, stoic approach to viewing the natural world through the logic of Enlightenment rationalism.  The aim of the Romantics was to introduce the value of the emotional experience in human expression, especially in its relation towards physical reality.  Arguably, it’s historical infusion in English literature can be traced directly to the artistic response to the Reign of Terror (1793-94) which arose out of–and in many ways defined the popular image of–the French Revolution.

The poetry of William Blake and William Wordsworth, which exalts the aesthetic beauty of nature over its rudimentary empirical observations, set the tone for much of the later Romantics who followed.  Percy Bysshe Shelley, Mary Shelley’s husband, was another key figure in the Romantic movement, who heralded the naturalistic worldview, without making reference to the lifeless trappings of cold rationalism.  This is the environment Shelley was surrounded by as she penned her novel in 1818.  Despite often being overlooked as a mere accomplice to Percy’s more provocative work and demeanor, it was Shelley who expressed most poignantly the Romantic horror towards the Revolutionary elements that sparked the literary appeal for a greater appreciation for the aesthetics.

In the novel, Dr. Victor Frankenstein is a passionate man, enamored by the creative possibilities offered by scientific thought and rigor:

None but those who have experienced them can conceive of the enticements of science.  In other studies you go so far as others have gone before you, and there is nothing more to know; but in a scientific pursuit there is food for discovery and wonder (Chapter 4, page 49).

He is the quintessential child of the Enlightenment, not content with merely contributing to the understanding of life, but seeking to challenge the conventions that have traditionally constituted the definition of life itself:

Whence, I asked myself, did the principle of life proceed?  It was a bold question, and one which has ever been considered as a mystery; yet with how many things are we upon the brink of becoming acquainted, if cowardice and carelessness did not restrain our inquiries (page 50).

In this pursuit he labors, and theorizes, and experiments, until his desire for reanimating life in the lifeless is actualized.  The philosophical origins of the French Revolution followed a similar intellectual path.  The Enlightenment writings of Voltaire, Diderot, Paine, and Locke (among numerous others), too, sought to instill the spark of life in a lifeless body; the lifeless body being the decaying corpse of the common populace, whose dire condition was sustained through the traditional conventions that maintained its own authority by reducing the worth of the powerless to little more than a living death.  Like the feverish thrill of excitement that accompanied Dr. Frankenstein’s climactic success in creating life, the uprising of the lower caste of society against the social order that governed them–most vividly symbolized by the popular storming of the Bastille in 1789–served as a reinvigorated yelp of life echoing the labors of the minds that planted the seeds of its ascent; or, as articulated in Dr. Frankenstein, “After days and nights of incredible labour and fatigue, I succeeded in discovering the cause of generation and life; nay, more, I became myself capable of bestowing animation upon lifeless matter” (page 51).

Within the context of Shelley’s narrative, Dr. Frankenstein isn’t a malicious figure.  Indeed, he is a rather sympathetic character, whose intellectual feats and desire to push the frontiers of knowledge are quite admirable; even benign.  However, the man allows his zeal to take control of his reason, causing him to lose track of the reality he is bringing about before him:

But this discovery was so great and overwhelming that all the steps by which I had been progressively led to it were obliterated, and I beheld only the results (page 51).

The excitement of the event blinded the young scientist from contemplating either the means by which he was arriving at his desired results, or the possible consequences that these results would bring to fruition.  Thus, upon reaching the final hour of his work, Dr. Frankenstein at last stood back to observe and reflect on his creation, only to gasp in horror at what he had brought about into the world:

How can I describe my emotions at this catastrophe, or how delineate the wretch whom with such infinite pains and care I had endeavored to form?  His limbs were in proportion, and I had selected his features as beautiful.  Beautiful!  Great God! / I had worked hard for nearly two years, for the sole purpose of infusing life into an inanimate body. / I had desired it with an ardour that far exceeded moderation; but now that I had finished, the beauty of the dream vanished, and breathless horror and disgust filled my heart (Chapter 5, page 56).

Unable to deal with the reality of his creation, Dr. Frankenstein abandons it in disgust and fear.  Forcing the creature to venture into the world without order or guidance to nurture his maturity.

One can imagine the philosophical architects of the French Revolution having a similar reaction to the Reign of Terror that arose out of the hopeful revolt in 1789.  The events that disposed of the royal ruling order of France were instigated by the widespread uprising of the exploited masses against the forces that sought to keep them in chains.  It was seen as the will of the people at long last triumphing over the tyranny of their rulers.  Oppression and persecution at the hands of the monarchy was at an end, and the calendar could be set back to Year One, to symbolize the dawning of a hopeful new era of liberty and justice. 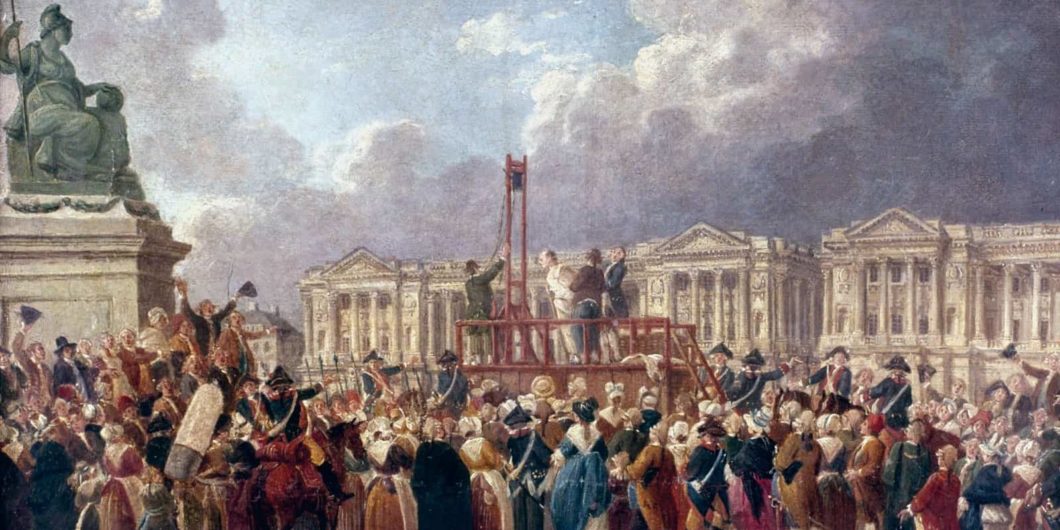 Unfortunately, the hope for change proved short-lived, as the concept of liberty and justice, rather than being put to practice, became mere cult devotions in the new regime, which swiftly began to denounce all who failed to properly adhere to the new revolutionary system as heretics to both.  Therefore, like Frankenstein’s creature, the Revolutionary model was arguably created with the most virtues of intentions, assembling together the most intellectually viable parts and ideals available.  Yet, outside of the containment of philosophical musings, where hypothetical entities and situations obey the whim of the ponderer, this idealistic goal turned into a nightmare.  Or, more astutely, once “rendered capable of motion, it became a thing such as even Dante could not have conceived” (page 57).

Frankenstein’s creation begins life innocently, but the grotesque circumstances of his existence fuel within him an unyielding destitute and hate.  At first, he wants to uphold the greater aspects of the human spirit (and contribute to it positively, if possible), but his abandonment by his creator, and the scorn leveled at him for his monstrous appearance, causes him to become evermore vengeful and destructive:  “Shall I not then hate them who abhor me?  I will keep no terms with my enemies.  I am miserable and they shall share my wretchedness” (Chapter 10, page 96).  His creation came about through the feverish frenzy of a strained mind, and his continued presence, incapable of assimilating with his greater surroundings, must therefore be justified by virtue of force and, if need be, destruction.   Particularly towards the person that gave him life and subsequently wishes to deprive him of it.

Similarly, the Revolutionaries who spearheaded the rise of the new order, and had zealously advocated the use of terror as an instrument against all possible dissenters, began to see their creation turn against them, as even the most powerful of them were duly marched to the blade of the guillotine.  Signifying how, in the end, the Terror ultimately managed to subdue even its own makers, who failed (or refused) to restrain it when they still held the power to do so.  This shift in control between creator and creation is a sentiment best captured when Frankenstein is confronted by his creature’s haunting words against him, “Remember that I have power; you believe yourself miserable, but I can make you so wretched that the light of day will be hateful to you.  You are my creator, but I am your master; obey!” (Chapter 20, page 160).

In Frankenstein, Mary Shelley gives a body to the monstrous history that spurred the Romantic literary tradition she was an immutable figure in.  However, in doing so, she also diverting from the standard premise promoted by her Romantic counterparts, by emphasizing on the fact that while man’s creative nature and passions can bring about unspeakably valuable works of creation and wonder, allowed to go unrestrained, this same nature can bring about monstrous consequences; for both the innocent and guilty alike.  No matter how well-intentioned the initial motivations may be.

3 thoughts on “Mary Shelley’s Frankenstein, as Allegory to the Terrors of the French Revolution”